Often credited with resurrecting a somewhat stagnant West Coast hip hop scene, The Game is one of those artists who, much like 50 Cent before him, had such a tremendous buzz and mixtape presence that when it was time for his debut album, the expectations were high, and those same expectations wouldn’t be that high again. The Game may have often been criticized for constant/excessive “name dropping”, but one thing you can’t deny is that he can rap, and he can rap his ass off too, especially when backed by thumping West Coast style production. Without going into all of the beef(s) and controversy that has plagued his career, when it comes to his four albums, his career almost can be compared to 50 Cent’s. One of the best albums in 2005 (and one of the best debuts from a West Coast artist since Snoop’s “Doggystyle”), “The Documentary” exceeded all of my expectations indeed. Excessive name dropping aside, Game shined as bright as he could on the mic, but the production was the real “star” of this album , which boasted a respected, high quality list of names (Dr. Dre, Kanye West, Havoc, Just Blaze, Hi-Tek, Scott Storch, Timbaland, & Buckwild, to name a few). This album remains his best (and that spot will never be taken by any future Game albums) and it also holds the most nostalgia vibe with me over the rest of his albums. Awesome material here.

5 favorite songs- Westside Story, Hate It Or Love It, Dreams, We Ain’t, & The Documentary (I actually had a slight hard time picking 5 favorites on this album.) One year after the critical and commercial success of his debut, all eyes were on the second album, in this case 2006’s apply titled “The Doctor’s Advocate”. One would assume that the title would all but confirm the presence of Dr. Dre, and while there was no Dre input on this album at all, it didn’t affect things in my opinion. This album was an excellent follow up to “The Documentary”, and it does give it a run for its money regarding the better album, but it falls short. The name dropping is still there, but it’s fairly toned down compared to his debut. Going back to the production, DJ Khalil, Just Blaze, Kanye West, Scott Storch, just to name a few, handled the beats VERY well, while Game was still the same, lyrically, on this album. 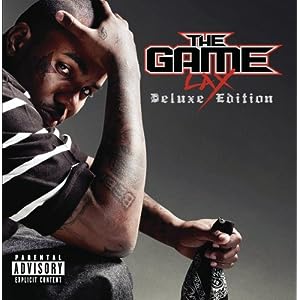 The buzz on The Game had considerably died down by the time his third album was released, which was 2008’s “LAX”. The production was very good (definitely not on the level of the first two albums), on the lyrical side, Game was like half and half on this one in my opinion, coming off inspired on some songs (“Letter to the King”, which features Nas, and they also have great chemistry together) and the opposite on others.  Overall it’s a very good album all things considered.

Rating- I changed my initial rating from 4 stars to 3.5.


After numerous delays and mixtapes (one too many mixtapes if you ask me), Game finally released “The RED Album” (I also copped this on the day of its release), and while I initially thought it was an excellent album, it’s like this album came and went with absolutely no fanfare and LESS buzz than his previous three albums, and that was a slight surprise to me. The list of producers was still impressive (including a first ever collaboration with DJ Premier, Cool & Dre, DJ Khalil, StreetRunner, Boi-1-da, etc, and interestingly enough, Dr. Dre was on the intro and outro, but provided NO beats on this album), Game lyrically didn’t bring anything new to the table, but he was better than he was on “LAX”, and there were more guest spots on this album than any other time in the past , mostly new artists (Tyler The Creator and Kendrick Lamar, who COMPLETELY steals the show on "The City") and familiar names (Beanie Sigel, Big Boi from Outkast, Snoop Dogg, and others I’m not a fan of such as Lil Wayne, Rick Ross, and Drake).

The Game has enjoyed a solid career thus far, and while he may not be in the headlines as year’s past, you can at least count on him to make a very good/excellent album, and I feel we’re going to get that with his next album, titled “Jesus Piece”, which may or may not be released next year. Feelings about the album cover aside, which can be seen here courtesy of hiphopdx.com (http://www.hiphopdx.com/index/news/id.21595/title.game-jesus-piece-cover-art) , I feel this time around he should has less guests on his album, as he’s capable enough of carrying a solo album. He arrived at a time when the West Coast needed that spark, and for that he has my continuous props and respect.
Posted by Wayne M. at Wednesday, October 24, 2012