My 18th favorite album of all time 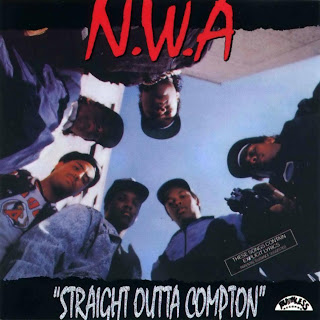 N.W.A. is one of the influential hip hop groups of all time. Talk about a group that was a hip hop dream team of sorts. You had the awesome production of Dr. Dre (and DJ Yella), the lyrical skills (and penmanship) of Ice Cube, the mastermind Eazy-E, and supporting member MC Ren, and as far as the West Coast goes, it doesn’t get any better than that. This “Straight Outta Compton” is such a landmark album in the annals of hip hop history, and being released in the “Golden Age” year of 1988, well, that makes it all better right there. With a memorable combination of superior production and gritty, gangsta lyrics, this is one of those albums that captivated its audience, as well as “touching another element of society that no one else had touched on” (quote taken from the “Welcome To Death Row” documentary), and when you get the attention of the FBI because of one song (the classic “F*** Tha Police”), you’ve done something. Also, shortly after this album’s release, it sold over a million copies, without any radio or video play, and at the time, that was unheard of. It eventually went on to go double platinum as of March 27, 1992. In a word, timeless.