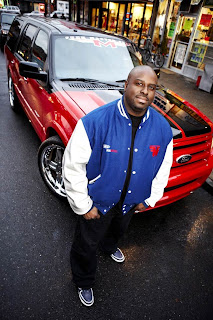 Before the controversies with DJ Clue and more recently Nicki Minaj, Funkmaster Flex was (and still is) best known for his own show on the well known Hot 97 based out of New York (since 1992). Although I'm aware of his contributions to hip hop since the early 90s, when I think of Mr. Flex, the first two things that come to mind are his Volume 1 and 2 mixtapes from 1995 and 1997, respectively. Those two mixtapes brings back SO many memories, and considering that 95 and 97 were two of my favorite years ever, that's a good thing. What most either don't know today and/or remember is that Volume 1 was the first mixtape released commercially, in this case on Loud Records. At this point in hip hop, when it came to mixtapes, you either got them from your local record store (like I did) or ordered them from a spot usually in New York (I did this as well, and I remember spots like Tape Kingz, Tapemasters, etc). While there haven't been many commercial mixtapes releases after Flex, he essentially opened the door for other DJs to release mixtapes on a commercial level (DJ Clue, DJ Envy, they're usually the first two that come to mind).

60 Minutes Of Funk Volume 1 (1995)
Flex's mixtapes were just that, traditional mixtapes, not necessarily compilations (even though it did have previously released songs and freestyles, which you didn't get anywhere but mixtapes at the time). The first volume is where it all started, and believe it or not, had it not been for my cousin Andre copping this on cassette, I probably would've never found out about this release. And of course when I first heard it, I was HOOKED, and it being released in 95 was the icing on the proverbial nostalgic cake. Let's take a further look:

Freestyles
The main drawing point of Flex's mixtapes (as well as other DJs in the 90s) were the freestyles, and on this volume, most of them were certainly memorable. Artists such as Redman, Method Man, Keith Murray, Fugees, Ras T, Q-Tip, KRS-One, Kaotic Style (this was probably the only thing they ever done, as they were not heard from again after this), Busta Rhymes, Rampage, Fat Joe, Big Pun, Erick Sermon did exceptionally well with their freestyles, however, Meth and Red had the best one. Flowing masterfully over Mobb Deep's classic "Shook Ones Pt. II", their chemistry was awesome and it would continue to this day.


The Verdict
Rounding out the rest of the mixtape, Flex supplied classics from Mobb Deep, Raekwon, Eric B. & Rakim, Run DMC, Special Ed, Doug E. Fresh, DJ Kool, BizMarkie, A Tribe Called Quest, and more. This one had a list of who's who from the year that was 1995, and it still holds up today. And during the closing, I recall Flex saying "big ups" to Black Moon, Smif N Wessun, Cella Dwellas, just to name a few, as due to a sample clearance issue, he couldn't have their freestyles on the mixtape (as well as a couple of other artists). I wonder if those freestyles are still in a vault somewhere. Overall, a strong recommendation.


60 Minutes Of Funk Volume 2
Much like volume one, the second volume in the series holds a VERY strong nostalgic vibe with me, probably slightly more than the first. The list of artists who contributed to this mixtape also read like a list of who's who considering who was making noise in 1997. Allow me to share a small story here. My aunt Denise came through for me in February (or March) that year, as she unexpectedly bought this cassette for me (even though my CD collection was still building at this point). I couldn't thank her enough, lol! I ended up copping the CD several weeks later. Now, when I first played it, I'll admit it, I wasn't feeling it too much, BUT, when I played it the second time, BAM, it instantly caught on with me and it hasn't let me go since!


Freestyles
Take a look at this lineup of artists who came with freestyles on volume two:

This is a loaded lineup, and to this day, I can't even begin to tell you who had the best freestyle on this mixtape (look at the first two artists on the list!). Boot Camp Clik's freestyle clocked in at about 8 minutes, and the length didn't matter, it was VERY good. A few criticized Mary J's freestyle, mostly because she's an R&B artist. I completely shook my head at that. She didn't have to do a complete freestyle like all the other artists, respectively. What she did was nice in my opinion and it delivered. All of these freestyles are memorable, and that's one thing that's missing from hip hop today: the art of freestyling.


The Verdict
Although Flex rounded out this with classics like the first volume (in this case, M.O.P., DJ Kool, Method Man, Naughty By Nature, Redman, Cypress Hill, Capleton, Run DMC, Soul II Soul, Slick Rick, and even taking it further back with Parliament, Keni Burke, & The Gap Band), this volume was mostly about the freestyles, and as mentioned up top, all of them delivered. When I play this today, I still brings back many memories from 97, especially the summer that year. The nostalgic vibe here is SO strong you can FEEL it in the air. Talk about taking me back to a moment in time, and if I could relive it all over again, I would (much like the 90s period). Another strong recommendation.


He did release a third and fourth volume, but those two paled in comparison to the first two, especially with volume four coming off more like a compilation than a mixtape. Flex also released "The Tunnel" with Big Kap in 1999, and that was another compilation as well. I cannot thank Flex enough for 60 Minutes of Funk Volumes 1 and 2. Timeless.