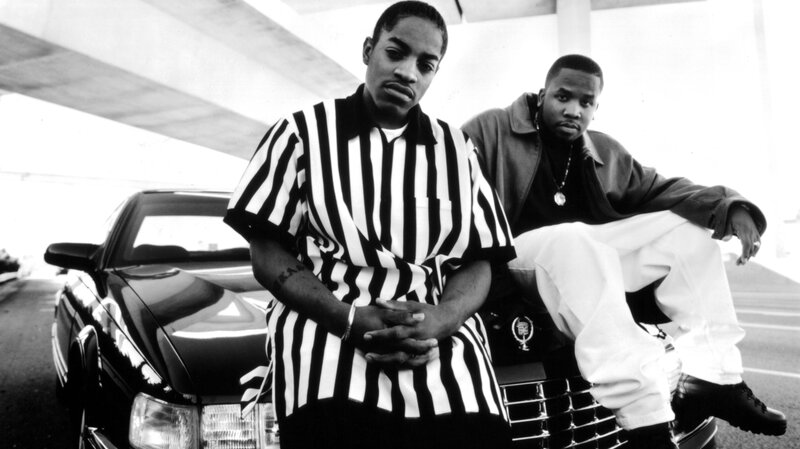 Outkast, one of the most creative and talented hip hop duos of all time. Their success and track record speaks for itself, with a string of classic albums and singles that’ll stand the test of time. One of the key factors that has made me a fan since their debut is that they constantly changed their sound and style, to positive and successful results. Each of their albums sound different from each other, and had they stuck with the same style they had on their debut, more than likely the sound would’ve become tired and possibly in need of an update. I definitely applaud them for not only switching things up, but also remaining fresh in an ever changing hip hop scene, AND getting bigger (and better) with each successive album released. Speaking of changes, I can definitely apply that to Andre 3000, who not only has evolved into a multi talented artist (largely beginning with the “Stankonia” album), but also an artist you can count on him to deliver a memorable, show stealing verse just about every time he has a guest appearance on someone’s song. Impressive indeed. And speaking of impressive, that leads me to their discography. This is my favorite Outkast album, so of course that naturally means I feel it’s their best. There continues to be a lot of debate between this and their 2nd and 3rd albums, respectively, regarding their best work, and I still consistently pick their debut. To me, this is the one album that truly defined their sound in the 90s specifically, and it was at a time when Southern hip hop was starting to get a little more recognition on a national scale, and Outkast were one of the pioneers of that. I did have this on cassette before I eventually copped the CD. Overall, classic material here, lyrically and on the production side of things, thanks to Organized Noize. Did I mention it’s their best album, lol??!! Outkast continued to get bigger, and that was very clear with their 1996 sophomore album, “ATLiens”. This is a surefire classic to be sure, and it does come CLOSE to being better than their debut, but in my opinion it’s not the better album. Big Boi and Andre still deliver the lyrical goods on this album, with a more refined style this time around. The wonderful 3rd album from Outkast, and at this point, more and more people continued to take notice, as they still managed to grow as artists, and I respect that a lot. “Rosa Parks”, even with the unfortunate (and unnecessary) controversy surrounding the song, was nominated for a Grammy Award for Best Rap Performance by a Duo or Group (this wouldn’t be the last time that they would be mentioned at the Grammys). They’re also one of the very few artists/duos to have three consecutive 5 star albums. It doesn’t get any better than that. Two years after “Aquemini” (I didn’t mention that that’s a very creative album title utilizing their zodiac signs, Aquarius & Gemini), they returned with quite a bit of hype with “Stankonia”, and again, they continued to get bigger in the process. Andre (now going by “Andre 3000”), was beginning to positively stretch the bounds of his creativity, and this is in reference to his presence on the mic, lyrics, and wardrobe. Remember what I mentioned about the Grammys during the “Aquemini” album? Well, in 2002, they won Grammys for Best Rap Album and Best Rap Performance by a Duo or Group for “Ms. Jackson”, two outstanding accomplishments. As far as this album goes, it’s still fairly excellent, but compared to their first three, it’s not on the same level.

After a deserved hiatus, Big Boi and Dre returned in 2003 together, but separately with this double album. The “Speakerboxxx” disc would be solely Big Boi, while Andre 3000 held his own with “The Love Below”. I give them credit for trying something different, and as usual with this duo, they succeeded in spades. While Big Boi supplied the hip hop sound, Andre 3000 explored his R&B/Soul side, and while it may not be for everyone, when you actually sit down and listen to “The Love Below”, you’ll hear a record that exudes creativity. Not only is the creativity (still) there, but this is their most successful album to date, as it is one of the few certified diamond hip hop albums (shipping more than 11 million albums), plus they received another Grammy Award, this time for Album of the Year, which was their second hip hop album to win that award. The success of this group is nothing short of amazing. And now we come to the most recent Outkast album as of 2006, and that’s the “Idlewild” soundtrack. To this day, I’ve never seen this movie and I still may check it out at some point. The accompanying soundtrack is very good, however, if I had to pick the most disappointing album in their discography, it’s this one.

Wow, a string of classic albums and singles, a large amount of success and accolades, Outkast has essentially done it all, and I feel we haven’t seen the last of them. Since the “Idlewild” soundtrack, both men have mostly been involved in separate activities, specifically Big Boi releasing his debut solo album in 2010, the excellent “Sir Lucious Left Foot: The Son of Chico Dusty”, which I also bought the day of its release. Andre 3000 continues to blaze each and every guest spot he's a part of, while more or less not confirming whether he would release a LONG awaited solo album or not, as well as saying it may be a while before we see another Outkast album. That is slightly disappointing, but, as long as there is no beef between them (which there isn’t) and we get inspired material from them when/if they do decide to release a new album, it’s all good with me.