My 15th favorite album of all time 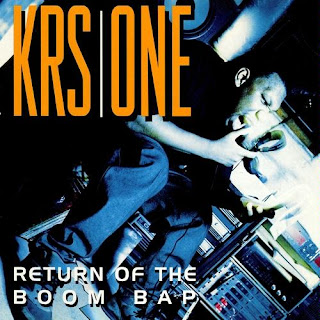 After a memorable (and historic) run as part of Boogie Down Productions (which he also founded with the late Scott La Rock), KRS-One took some time away after 1992's disappointing "Sex & Violence" album (which also turned out to be the last album with under BDP) and returned with a vengeance in 1993 with his first solo album, "Return Of The Boom Bap". Going back to BDP, he had already established one hell of a track record, releasing two classics in the form of 87's "Criminal Minded" and 88's "By All Means Necessary", two almost classic albums in 89's "Ghetto Music: The Blueprint of Hip Hop" and 90's "Edutainment", as well as hip hop's first live album ("Live Hardcore Worldwide"), and the aforementioned "Sex & Violence".


This is actually one of the first albums I ever owned, and it was on cassette too. Due to constant playback, the tape popped months after I got it and I was crushed, until I copped the CD that is, lol! Produced largely by DJ Premier, an inspired and energetic KRS-One delivered the goods on this album, classics up and down the lineup. "KRS-One Attacks" starts this album off with a bang, as it's one of the best intros I've ever heard. "Outta Here" is a classic and "Sound Of Da Police" is one of the best songs I've ever heard. No question, this is KRS' finest hour on the solo tip.