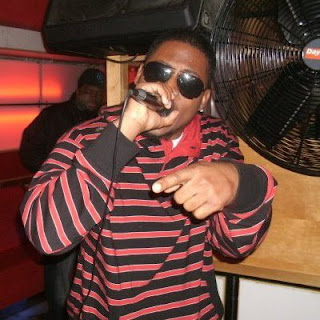 Over the last several weeks, I've all but boycotted mixtapes, simply because of two reasons: 1) it's too many of them being released and 2) I'm a little tired of artists (mostly the established ones) announcing a new (studio) album, but we get about 3 or 4 mixtapes in its place (and sometimes a few of the songs that were present on the mixtapes end up on the actual album). I'm a loyal hip hop fan, so when I complain that there's TOO MUCH music, that's saying something.

This time around , things are different. This review is solely dedicated to an upcoming artist trying to make his mark. Representing our hometown of Petersburg, Virginia, as well as being a friend and fellow graduate of Petersburg High School, Ishaboy Luke is a force to be reckoned with and is really trying to put Petersburg on the map, in the hip hop form. When he announced that he would be releasing his first mixtape, I knew immediately I would get a copy, and I have no problems supporting someone new, especially when we're both from the same area.

(In this review, it'll admittedly be slightly difficult to not be biased, but you can be rest assured all of my remarks are 100 percent legit.)


*We begin things with "See Me N Copy", his first video as well (which is very good), and this is practically one hell of an introduction, and this would be the first song I would play to a newer fan. The production on this song (and the majority of this mixtape) is great and his double time flow, marked with a "natural, aggressive charisma" really stands out.

*The apply titled "I Do Me" is a very good follow up to the first track. He said "he's no trapper or gangsta, I do me, I do me", and I definitely feel that. Note to aspiring artists: contrary to what some may tell you, one of the best ways to succeed and earn respect in the hip hop world is by being yourself and refraining from being something you're clearly not. One listen to this song should spark that inspiration.

*Don't let the title "Stupid" fool you. Isha delivers serious real talk on this track ("you ain't in my head, you don't see my blueprint", that right there is simple yet effective. We have all encountered some people in our lives who thought we were stupid at one point and time, but in the end they were proven wrong.

*"Loud" serves as a metaphor of sorts, comparing smoking to how he prefers his music. Has to be heard to be appreciated.

*Well, the next two tracks are the expected, but not dismissed "tracks for the ladies", the first one in the form of "Shake". This bass filled, bouncy type track is tailor made for the dance floor, and I guarantee you the floors would be filled if you throw this joint on, no question. The hook is quite different, but in this case, it works.

*"All Mine" is on another level and it has a much different vibe than the previous song thanks to the R&B inspired hook. Isha still blesses this track though.

*In something most of us can relate to, "Change Is Good" is a very good title. He details his life experiences, all the while acknowledging that through it all, "change is good". Yes indeed.

*The "natural, aggressive charisma" continues on "Don't F Wit Me", and that title basically says it all right there. The hook to this one was unique to say the very least, and I feel it could've benefited from being rapped instead of sung.

*"Go Hard" has the first guest appearances, with G Grizzy and Ill Lyric coming along for the ride. All three of them "go hard" for what they represent, and over a nice beat, they get the job done to good results.

*I didn't mention this earlier, but Isha's knack for witty punchlines is something that cannot be ignored, and that is very present on "Gimme Da Power", a brief freestyle ("if beef be the subject, then heat be the predicate").

*On "When Ur Up", he gives his own take on what happens when things are looking up in your life (everyone claims to be your friend, people who weren't around before begin to come around, those same people weren't there when you were down, etc), and it's something I feel most of us can relate to. We may have heard songs like this before, but it's fresh to hear Isha's perspective on the matter.

*In addition to the aggression, you get a very serious tone in his tone and delivery, and that is clear on "Not A Game".

*Featuring another good artist (Young Dot), "Show Me Ur Best" is direct or indirect challenge to those to do just that, and after listening to this, I wonder who would take them up on this challenger, line for line. Dope track overall. (Y'all n***** too young to roll wit me, you just a fetus", great line right there)

*We get the first flow/freestyle over another artist's track, in this case Nicki Minaj's "Moment For Life". This is another case where it's simple yet effective, and in my opinion, this brief freestyle was better than the actual Minaj/Drake collabo.

*The momentum slows just a bit on "Jump Rite In It". Lyrically Isha still brings it, but he does over an ok, yet forgettable track.

*Set Me Free" is rather nice and energetic. He definitely is set free on this track and he takes full advantage of it, along with a creatively placed soul sample for the hook. Nice job.

*Over Kanye West's "Say You Will" instrumental, we get "Breathe", which would've been a very good way to close this mixtape, but then we the next bonus.

*With a title like "I'm So Fly", you would mistake this song for any familiar song today, BUT, Isha puts a clever touch on this one, mainly due to his wordplay. Also, guest Lil Kilo (10 years old to boot) will probably influence others his age by his presence here. Very good.

Overall, this was a VERY  good mixtape. Had this been an album, I would have no problem giving this a solid 4 star rating. I honestly have no complaints about his first mixtape. Ishaboy Luke fires on all cylinders and I expect more greatness as he continues. Even if he wasn't a good friend and a fellow high school graduate, my feelings would still be the same. He has a big future and much like Trey Songz put Petersburg, VA on the map in the form of R&B, Isha definitely has what it takes to take things to another level in the hip hop way. I just sincerely hope that once he begins his debut album, he'll bring that same heat on this mixtape and not dumb down his flow in any form for mainstream/commercial success (or what I would call the "J. Cole syndrome"). He's TOO good for that. And one last thing, he'll reach more listeners by uploading this mixtape on popular websites like www.livemixtapes.com and www.datpiff.com. In closing, thumbs up for your mixtape Isha!!!!!