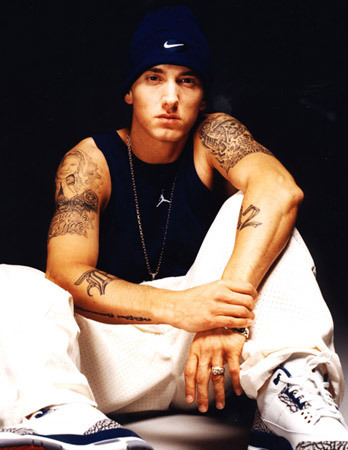 One of the most influential artists of his generation, Eminem has essentially done it all:

I know I was brief there, but that generally sums up what this man has accomplished since his studio debut in 1999, which I will touch on during this post. But before I get to his discography, I want to share a little something. When I first heard Eminem, it was the "My Name Is" song. Now, I'll admit I wasn't thoroughly impressed when I first heard it, but after a while, it grew on me, just a little here and there, but not enough to buy any of his albums at that point. Then, in mid 2002, he won me over and I recall buying "The Marshall Mathers LP" and "The Eminem Show" together (from Circuit City) and I was generally impressed. But something changed. After that first listen, not only did I not revisit them again, but I was "cleansing my collection" and unfortunately I sold (or traded) them. It wasn't that I didn't like the albums (or Eminem) anymore, but rather I didn't think I was going to revisit them again. Fast forward to 2010, and it was this song right here with Slaughterhouse that won me over for good:


This song is tight as all hell, and I liked it so much that I immediately made plans to buy his entire discography, and I did so, which I'll discuss further. It took me a LONG TIME to get this album, which I eventually did this year! I still say wow to that, lol, as I was incredibly late, but better late than never. This amazingly wasn't my introduction to Em, however, it was a very good debut. He would only get better from here. Em is one of very few artists whose second album is better than their first, and he succeeded with this album. When I bought this the second time, it was on my birthday in 2010 (June 25th!!!!!), and in addition to this album, I also bought "Relapse Refill", "The Eminem Show", & "Recovery", which also came out that week. So when my birthday comes, you know I'll remember that day! Continuing on, Eminem only got bigger and better in the process with this album all around. "Stan" exhibits his storytelling skills in an excellent way and it's one of my favorite songs from him. "Kim" is one of the most unique, controversial, disturbing songs I've ever heard, but in no way is it offensive. Overall, this is probably his best album and it deserved the commercial and critical success it received. A hell of third album from Eminem here, and again, he continued to get bigger and better. He took what worked on his second album (even getting a little more political on a few songs) and dropped an absolute gem of an album.

5 favorite songs- White America, Sing for the Moment, Till I Collapse, Without Me, & Soldier Oh God, do I have to speak on this atrocity?? Well, I guess every artist is apparently entitled to one musical mistake, and for Eminem, this was it. Other than the very good "Like Toy Soldiers", this album has NO replay value to me whatsoever and it's clearly his worst album ever.

Rating- 2 stars, which is SOLELY for "Like Toy Soldiers".

This is the one Eminem album that has grown on me over time, and it seems like the more I listen to it, the more I like it. At the time it was released in 2009, it received mixed feedback from a lot of fans and critics, and later he continues to apologize for this album, and I'm not sure why (if anything he should apologize for the "Encore" album). I understand he was battling a drug addiction in the lead up to this album, he used an accent on most of the songs, etc. Be that as it may, that's part of the appeal of this album, as it's definitely something unique and different here, and it's not for everyone. In my opinion, this is an excellent album, one he should be proud of. And the fact that this came with the bonus "Refill" disc was the icing on the proverbial cake.

5 favorite songs- Underground, Crack a Bottle, Medicine Ball, 3 am, & Must Be The Ganja Another excellent album from Eminem, and it's a very good companion piece, if you will, to "Relapse Refill". This was one of the best albums in 2010, as he sounded focused, energized, and inspired, and any time  you get those 3 elements on an album, you're guaranteed something great.

When it's all said and done in this world, Eminem will go down as one of the greatest ever, not because he's white, but because of what he can do on the mic (not to mention all of the acolades he's received), whether it's storytelling, humor, political, and hard rhymes. Another thing he does, and I feel it gets overlooked by some, is he takes well deserved breaks in between releasing albums. Someone of his caliber doesn't need to drop a mixtape every 6 months to stay relevant. When he "goes away", not only does he allow you the time to get his current album straight, but he also makes you miss him, and when he does announce plans for a new album, your anticipation level is high, and yes I am looking forward to his next album! Amazing.


One last thing, I'm still waiting on that Nas & Eminem collaboration, and hopefully it happens at some point in the future.
Posted by Wayne M. at Tuesday, September 04, 2012