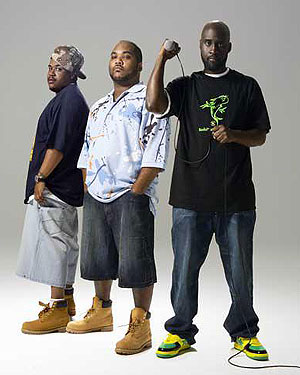 In 1989, hip hop had a good amount of social and political awareness, largely thanks to Public Enemy and Boogie Down Productions. You also still had the usual hard beats and rhymes, thanks to the still growing East and West Coast scene, but if there was one group who decided to emerge and be completely different from everyone else (and it wasn’t heavily embraced at the time) is De La Soul. Although the Jungle Brothers got started a year earlier with their very good debut “Straight Out The Jungle”, De La essentially pioneered what is now known as the “Daisy Age”. One of the things that was so good about Trugoy, Pos, and Maseo is that no matter how different they came off as, especially in the early stages of their career, they continued to do what they did best, no matter where the criticism came from, and for that I’ve always respected what they stood for. And speaking of doing what they did best and not changing, you can say the same for the rest of the Native Tongues crew, which consisted of A Tribe Called Quest and the Jungle Brothers, in addition to De La Soul. Now, when the mid 90s came, De La did update their sound, and we’ll get into that a little later in this post when I discuss “Stakes Is High”.

When I think of this album, one of the first words that come to mind is creative, and that’s what this album is. It was one of the great releases of 1989, and arguably their best album. Something like this would completely go over the heads of today’s generation, and again, one of the best things about this album is how different it was compared to everything else out at the time. You got a very fine balance with hip hop, and everyone wasn’t copying the latest trend or trying to sound like the next person. You stood out more when you being yourself. Oh yeah, I wish the “Buddy” remix was on this album!

5 favorite songs- Buddy, Potholes In My Lawn, Me, Myself, & I, Plug Tunin (Last Chance To Comprehend), & Say No Go This is another album that’s creative, and probably a little ahead of its time. This was one hell of a statement when it came to distancing themselves from the term “Daisy Age” (apparently all the criticism was causing more headaches, so I can understand why they would want to pursue another direction after this). It still holds up today and much like their debut, it’s timeless. I also have to mention they effective used skits in such a manner that you can’t help but to listen to them. 1993 and one of the latest beginnings of more changes in the landscape of hip hop. With the West Coast (Death Row Records specifically) on top of the mountain and the East Coast preparing for a memorable resurgence, De La’s 3rd (and probably most underrated) album fell largely on deaf ears, as only the most hardcore of supporters purchased this one. It’s still very good, just certainly not on the level of their first two albums.

One of 1996’s most slept on albums, “Stakes Is High” is my personal favorite De La Soul album. And when you listen to this one, you’ll notice a true difference (and departure) from their first three albums. Pos and Trugoy got increasingly better on the mic and the production followed suit as well. This also has the strongest nostalgic vibe with me, which is always a plus. Excellent indeed.

Rating- 4.5 stars (This may change at some point.)


I don’t own either of the “Art Official Intelligence” albums. I have heard the “AOI: Bionix” album, but wasn’t too impressed.

(Update: These two albums have been added to my collection.) This was a semi quiet release in 2004, but make no mistake about it, it was one of the best albums that year. It does give an album like “Stakes Is High” a run for its money that’s for sure. It’s excellent all around. Trugoy and Pos were still great on the mic, and with the production handled by the late J. Dilla, Supa Dave West, Madlib, and Jake One, this is their last true great album.

I checked this album out on Spotify a few months back, and I was looking forward to it. And needless to say, I wasn’t impressed whatsoever. I’m not sure why they decided to take a more experimental direction on this album, but in my opinion it didn’t work. Forgettable effort and I hope this is not their last album.

Overall, they have a Hip Hop Hall of Fame career, largely on the strength of their first album. They were one of a few artists/groups who made it cool to be different, and for that, I have nothing but respect for what they accomplished over the years.
Posted by Wayne M. at Friday, September 28, 2012