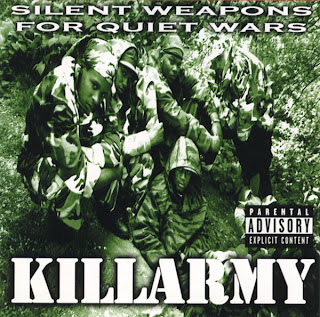 Man, this is another album that holds such a STRONG nostalgic vibe with me, straight from 1997. Affiliates of the Wu-Tang Clan, Killarmy is a collective of skilled, but very underrated (to this day) lyricists. And speaking of 1997, I have a small story on this album.

In the summer of that year, when I first saw the video to "Wu Renegades" on Rap City, I went crazy. I LOVED that song (and video), so saying I anticipated this album is an understatement. I also remember two of my good friends Shaun and Marcellous recorded the video (remember those days of recording videos off TV onto a 6 hour VHS tape??) and one day when all of us got together, they rewinded the tape to the video just so I could see it! I appreciated that so much. I ended up getting the album in December of 1997 around Christmas time, and you know I was VERY happy about that! This album was in HEAVY rotation from the moment I bought it all the way up to April of 1998.

Today, I still spin this album and like other albums that have a strong nostalgic vibe with me, this instantly takes me back to 97 and that period when I listened to it constantly. The military influenced lyricism (with a Wu twist) from 9th Prince, Dom Pachino, Killa Sin, Shogun Assassin, Baretta 9 and Islord (he was incarcerated at the time of this album's release), backed by tight production from 4th Disciple (an underrated producer) and one track from The RZA made this one an excellent album. It didn't receive a lot of recognition at the time, and even with that it still remains a personal favorite of mine.

After this album, they released two more albums, each receiving less attention than the one before it. 1998's "Dirty Weaponry" is very good (I have to revisit that one too!), while 2001's "Fear, Love, & War" is essentially forgettable. We don't hear too much from them today, and in today's hip hop world, Killarmy would be too advanced for the "new generation". Also, I wish Killa Sin would've released a solo album. He was arguably the group's best member and I would liked to have seen what he could do with a solo album. Overall, "Silent Weapons For Quiet Wars" equals dopeness.