Starting with this post, I'm going to talk about specific albums that have been forgotten over the years. Some choices may be better than others, but at the end of the day, it's all for the love of hip hop. I will go in depth a little about why I feel the albums were forgotten, and of course I'll throw my thoughts in there as well. For the inaugural post, we'll begin with Sadat X. 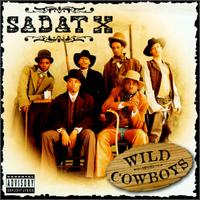 Released on July 16, 1996, this was Sadat's first solo album, and being part of the very good group Brand Nubian certainly helped out a lot. I did anticipate this back in 96, however, believe it or not, I actually didn't get this (and hear it for the first time) until early 2008, and that's largely because this album has been out of print for the longest time (which it still remains today), so I was fortunate enough to find a very good/used copy of the album on www.half.com. And that says something right there, because I RARELY buy and/or order used music.

Why this album has been forgotten?
Well, 1996 was a stacked year in terms of hip hop releases, so you can chalk this one up to being lost in the shuffle. Songs such as "The Lump Lump" and "Stages & Lights" made a little noise, but overall this one fell under the radar. On another note, in 2010, he released the sequel to this album in the form of "Wild Cowboys 2", and it was one of the most disappointing sequels/albums I've ever heard.