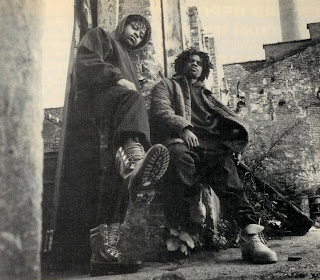 Originally from my hometown, Petersburg, Virginia (yes indeed!), Das Efx took the hip hop world by storm in 1992 (along with the rest of the Hit Squad), ushering in new style of rhyming (fast paced with the "iggedy" term being present in most of their rhymes), completely setting a trend that other artists followed. But make no mistake about it, Skoob and Drayz set that trend and they'll always be known for that. On a small personal story, there was a rumor, sometime between 1992-1994 that they were in my neighborhood one day (I used to stay in an apartment complex known as Lee Hall Apartments, now known as Rose Garden). I recall someone just yelling hysterically, "Das Efx is here yo!!!" Initially I didn't believe it, as even though that complex was a hot spot at one point and not a bad place to live, there was NO reason to believe that Das Efx (or any other artists for that matter) would be in a random neighborhood like that, lol. That same day, I remember walking to the area that they were allegedly in, I saw a car with two guys with dreds, but it didn't look like Das Efx. I'll never know, lol. With all that said, they had a very solid career and although the times have certainly passed them by, their first three albums alone will stand the test of time, especially their debut. Straight classic right here, almost ahead of its time. I remember going completely crazy when I first heard "They Want Efx" (one of the best James Brown samples ever) and "Mic Checka", and not only that, they had remixes to both songs, and they were just as good as the originals. Awesome, and it still holds up today. No sophomore jinx here, as Skoob and Drayz took what worked on "Dead Serious" and perfected it on this great album. It's just as good as their debut if not better. (Personal story: Back when I was still buying cassette tapes, I bought this one either in late 93 or early 94, and unfortunately I lost it months after the fact. I was more upset than unhappy let me tell you. I finally got my hands on the CD YEARS later, and it rests comfortably in my collection!) Ah, 1995, one of my favorite years ever, especially when it comes to hip hop, and at this time, Das Efx was slowly fading into the background. Times were changing, but they weren't keeping up. That's NOT to say that this third album wasn't great, because it is, and it's the most underrated album in their discography. When it came to hardcore East Coast beats and rhymes, they delivered, too bad it was slept on. The year was 1998, and talk about an album that fell SO FAR under the radar that it's an understatement. Skoob and Drayz gave us more of the same with this album, however, their sound was in great need of an update, and it showed on this album, which was uninspired overall. Believe it or not, I first heard this album during the early part of this year, and needless to say, I can see why I wasn't checking for it back in 98.

I haven't heard this album, although I may check it out as some point. Released in 2003, this one fell further under the radar more than "Generation EFX" did, with little to no promotion at all.

When it's all said and done, Das Efx will be mostly known for setting a trend that was completely jacked and reshaped, for better or worse, plus they gave us 3 very solid back to back albums at a time when they were creatively at the top of their game. Do they have one more good album left in them? They might.
Posted by Wayne M. at Tuesday, August 07, 2012