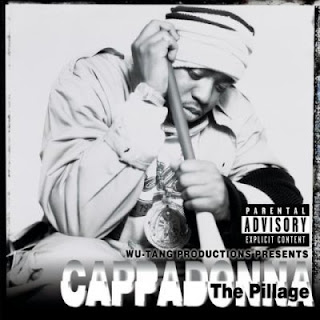 Always considered the "unofficial 10th member" of the Wu-Tang Clan, Cappadonna has largely been hit or miss for the majority of his career. He first appeared on Raekwon's classic "Only Built 4 Cuban Linx" album and did very good on the songs "Ice Water" and "Ice Cream", and from there he was featured prominently on Ghostface's "Ironman", appearing on 5 songs and totally stealing the show on "Winter Warz" (which will always be his best verse ever). Continuing on, he was prominently featured on the "Wu-Tang Forever" album, but still being listed as "featuring", but no direct hints at being "the 10th member". I respectively never agreed that he was good enough to fill that spot, but he's more than held his own with the Clan over the years. When I heard that "The Pillage" was dropping in 1998, I anticipated it. And of course, a post like this comes with a small story, in the form of my cousin Andre copping this album before me, me almost begging to borrow it (lol), then buying it a few months later, lol. The first time I heard "Slang Editorial" and "Run", I couldn't stop bobbing my head (thank you RZA and True Master!!), and the rest of the album was fairly decent, even with some questionable songs such as "Milk This Cow" and "Check For A N****".  This album remains his best, and literally every album he's released since has not come close to being on the level of this one, so it's safe to say he peaked with this release, especially on a lyrical level. I never even bothered to check out subsequent albums.

Rating- 3.5 stars (I've always said this album would be 4 stars if "97 Mentality" would've been included.)