I remember this classic photo from a Source magazine issue in the summer of 1997 (June, July, or August), so I had to include it up top! The BCC, or should I say, the WWBCC! One of hip hop's greatest clicks, this collection of talented MCs have been mainstays of the underground for years (not a bad thing at all), and they still remain strong today, although on a much lower level than years past. Buckshot (of Black Moon), Smif N Wessun (aka Cocoa Brovaz). Heltah Skeltah, and OGC displayed great chemistry when performing together (much like the Wu-Tang Clan), and never was that more evident than on the classic "Headz Are Reddee Pt. II". In this post, what I will take a look at is their discography, beginning with Black Moon's 1993 classic "Enta Da Stage". Not everything will be included, respectively, as I'm only going to touch on the albums I own. One thing all of their albums have in common is hardcore, NY/East Coast beats along with tight lyrics. I've always liked this album a lot, and I do credit it as one of the many albums that resurrected the East Coast hip hop scene at the time. "How Many MCs" is one of my favorite videos of all time, and "Powerful Impak" is one of the best album openers ever. Top notch debut from Black Moon.

5 favorite songs- How Many MCs, Powerful Impak, Black Smif N Wessun, Who Got The Props, & I Got Cha Opin (I had a slight difficult time picking 5 favorites on this one!) Marching on to 1995 we have Smif N Wessun's debut, and much like the Black Moon album, this was a top notch debut. I remember hearing "Bucktown" on the radio for the first time (as well as seeing the video) and my head could not stop bobbing! I didn't get the album until MONTHS after its release, and it's been part of my collection ever since, and with it coming out in 95, that ever so present strong nostalgia vibe is always there. This was released fairly quietly in 96, and even I didn't know of its exsistence until years later, which is when I added it to my collection. This is a very good compilation of B-sides and remixes, with the most famous one being the remix to "I Got Cha Opin".

Another one released in 96, this carries a strong nostalgic vibe as well, as its been part of my collection since its release. Songs like "Operation Lockdown", "Therapy", "Undastand", and "Leflaur Leflah Eshkoshka" always take me back when I listen to those songs (as well as the rest of the album) and it remains their best. On a sidenote, I remember my long time Shaun getting hype (and dancing along too) when he saw Tek from Smif N Wessun dancing around the campfire in the "Operation Lockdown" video. Memories. This was also released in 96, but in October of that year, and man do I have another story! I remember in the early part of 97 (can't recall the month), my friend Shaun and I had went to a record store named "Crockett's Records, Tapes, & CDs. Unknown to him at the time, my SOLE purpose for that visit was to buy another copy of Nas' "It Was Written". To this day, I don't know if he heard the OGC album or not, but he REALLY kept pushing and pushing me to buy the album, lol. I'm looking at the CDs and the whole time he's behind me saying, "I'm tellin you, I'm tellin you!" LOL. I couldn't stop laughing. I simply told the clerk, "the Nas album please", lol. I bet he doesn't even know I remember all that, but I do, lol. (I didn't buy the OGC album till early 2008.)

Another thing about this album is, I always wondered why we never got a "Fab 5" album, and the Fab 5 consisted of Heltah Skeltah and OGC, and now when I think about it, we probably didn't get this because the first Boot Camp Clik album was on deck for 1997. NOW we can touch on OGC's debut, lol, which was very good. It wasn't on the same level as previous BCC albums, but it's good nonetheless. After 97, the BCC began to cool down a bit after a red hot period (93-97), and it all started with this album, which I plan to revisit soon. Released in 1998, the original Smif N Wessun (with a brief name change to Cocoa Brovaz due to issues with the gun company of the same name) were still very good at this point, although this album was slept on at the time. "Black Trump" featuring Raekwon made a little noise, but overall, this one had no buzz like their first album. Still a good album though. 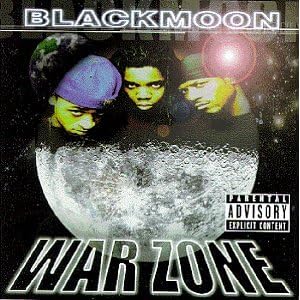 This one dropped, quietly, in 1999, and it was slept on admist everything else that came out that year. It's a fairly decent album, but certainly not on the level of "Enta Da Stage".