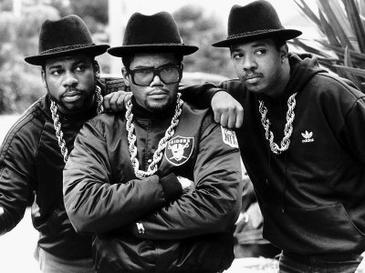 One of the greatest, most legendary groups of all time, Run-DMC's place in hip hop history is clearly cemented. All of the accolades and success they've achieved (before and after Jam Master Jay's unfortunate death) have been well deserved. Talk about a group that broke SO much ground (MTV exposure, one of the first hip hop acts to go platinum) and opened so many doors for future artists before them. When it comes to influences, most artists would name Run and DMC as individual artists, while Jam Master Jay had certainly established what being a DJ means and how to take your craft seriously. Today's generation may not even know of Run-DMC, but long time fans will always remember the impact they left on hip hop and their string of classics, which is what I want to touch on during this topic, in a different form. Released in 1984, this is the album that started it all and not only does it still hold up WELL after 28 years, it remains their best album and one of the greatest albums of all time. Whether it was talking about the issues at the time ("Hard Times"), biggin up their DJ ("Jam-Master Jay"), integrating hip hop and rock for the first time ("Rock Box"), they were at the top of their game, early game on this album. Another breakthrough, landmark album for hip hop. Coming off of "King Of Rock" (more on that album later), they reaped and saw their biggest successes with this album, namely in the form of the crossover classic with Aerosmith, "Walk This Way". Also, throw on "Peter Piper" today and it'll still get the party jumping!

5 favorite songs- Peter Piper, My Adidas, Walk This Way, You Be Illin, and It's Tricky

Like always I'm going to be completely honest on this part. As mentioned, Run-DMC are legends and most of their material is timeless, however, a good portion of their music hasn't aged well over the years in my opinion. Let's take a look shall we. It's often easy to forget that this album was released between their self titled debut and Raising Hell, and I can see why. Outside of "King Of Rock", which is a classic song and another good song in "Can You Rock It Like This", time has clearly not been kind to this album and it shows. There's a reason why this album is rarely mentioned. It's like they tried too hard to take the successful elements from the first album and incorporate it in this album, as well as exploring new material (sorry, but Run-DMC and reggae was NOT going to cut it) and failing miserably. Sophomore jinx? I think so.

Sole highlight on this album is "King Of Rock", and I'm going with a 2 star rating for this album. Times were indeed changing in the hip hop world in 1988, and as mentioned in other articles I've read, Run-DMC were largely considered yesterday's news when this album came out. The movie of the same name (I've seen it once and never want to see it again) was a critical bomb to say the very least and the album itself, while it had a few good songs (Run's House, Mary Mary, Beats To The Rhyme, etc) was relatively tame compared to everything else that came out in 88.

Probably 3 stars for this album.

My oh my, 1990 arrived and hip hop was still changing and evolving, and again, Run-DMC wasn't even on hip hop's radar at this point. Now, as of this post I've never heard this album (and honestly I'm not sure if I'll ever get around to checking it out, but that may change), but for all intents and purposes, feedback was either "lackluster and forgettable" to "good but nothing worthwhile". And we come back to this "change" thing again, and in 1993, with the West Coast reigning supreme, outside of the great "Down With The King" single, this album largely came and went so fast it's not funny. This is another one I've never heard, honestly, but at some point, I may check it out, along with "Back From Hell".

(Note: Even though I'm a long time fan, there are still a few albums out there I haven't heard. Don't be surprised, lol!) Oh wow, with all due respect, smh+lol, I have no words for this album.


Overall, even with the amount of non timeless material in their discography, their self titled debut album, Raising Hell, the classic song "King Of Rock", and even other tracks like "Mary Mary", "Run's House", "Christmas In Hollis", and "Down With The King" will always be remembered, as well as their contributions to hip hop since 1984. Long live Run-DMC and RIP to the legendary Jam-Master Jay.
Posted by Wayne M. at Monday, July 02, 2012