I first heard Christopher "The Notorious BIG" Wallace on a song off of the "Who's The Man" soundtrack titled "Party & Bulls*** (and if you're not familiar with that song, please youtube it now!) and from there, I was always a fan of him. He was mostly credited with bringing the "focus" back to the East Coast scene in hip hop during a time that was dominated by Death Row. I also remember how much my cousin Terrell and myself would often talk about how GOOD the song "Juicy" was, especially the line "birthdays was the worst days, now we sip champagne when we thirsty". Ah, memories. Speaking of memories, Biggie certainly created lots of them through his music, and with a successful career that was tragically cut short, his music and legacy continues to live on. 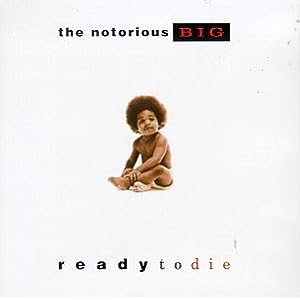 One of 1994's best albums, this was definitely a classic in the making. Whether it was due to the hits that were on the radio ("Juicy", "Big Poppa", etc) or via the master cassette, I heard this often back in 94 and this was long before I bought the album, lol! Be that as it may, when I first heard it, I enjoyed the hell out of it and still do to this day. Classic indeed.

To this day, I still say 1997 was the greatest summer I ever had, and when I think of hip hop music at the time, this album is usually one of the first I mention. If only the late great Christopher Wallace had been alive to enjoy the success of this album. As far as double albums go, it's in the top 5 no question.

Much like the Tupac Shakur piece, I'm not going to review "Born Again", due to Mr. Wallace not being alive to see its success or oversee the project. I also feel that had both of them been alive, they would've eventually settled their differences, no question, and there certainly would've been a collaboration or two between them.

To say that Biggie left his mark on the world of hip hop in such a short time would be an understatement. He, much like Pac, continues to influence aspiring artists, as well as those that lived through them in the 90s.