One of the all time greats in hip hop, Kool G Rap is one of the pioneers of the "mafioso rap". He did it and he did it well. Witty on the mic, masterful storytelling abilities, unmistakable flow, top notch lyricism, he clearly had it all, although he was never successful on a commercial level. When it's all said and done in this world, he'll go down as one of the best to ever do it, no question. We start with his 1989 debut with DJ Polo, "Road To The Riches", and it's filled with everything you could want in an album from that year (great lyrics and beats). Very good debut from start to finish.

5 favorite songs- Road To The Riches, Truly Yours, Trilogy of Terror, Poison, and Men At Work 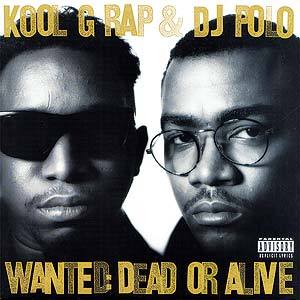 We fast forward to 1990 and this release, which was a hell of a follow up to "Road To The Riches" and I personally like this album better than their debut. The tight lyrics and beats continued, as well as a change in content, which was touched on with this album, but fully explored and expanded on with album 3.

Rating- Between 4.5 and 5 stars (STILL undecided on the rating, smh+lol)

5 favorite songs- Kool Is Back, Riker's Island, Death Wish, Play It Again, Polo, and Money In The Bank

OH YES, this classic from 1992! I love this one right here. This is the album I feel is Kool G Rap's best overall (and with Polo). The content definitely changed (which was one of the reasons why Warner Bros. Records refused to distribute it), he got more gangsta, along with the memorable production from Sir Jinx. He also brought a respectable number of fellow artists who FIT with theme of this album (Scarface, Ice Cube, Bushwick Bill,  and Big Daddy Kane). One of the things I like about this album so much is it plays like a movie on CD, much like Raekwon's "Only Built 4 Cuban Linx". His storytelling is at its absolute finest on this album and what resulted was a complete classic. In what may be considered his most underrated album, I was hype for this one back in 95 and it didn't disappoint. Lyrically he was still on point (there aren't too many times when he's not) and the production was decent, but when compared to his first 3 albums, it was a slight step down. Overall, excellence here.

5 favorite songs- 4,5,6, It's A Shame, Fast Life, Executioner Style, and For Da Brothaz Welcome to the late 90s (1998 to be exact), and in an ever changing hip hop world, Kool G Rap, largely considered a veteran at this point, was slowly fading into the background, directly or indirectly, and this largely slept on album came and went with literally no fanfare. It's still very good though and I bet most still don't know of its exsistence today. It seemed like it took forever for this to be released, and when I bought it, I was impressed. Lyrically he wasn't as sharp as previous albums, but overall he could still deliver the goods and he showed it on this album, another slept on piece of work. I never got around to checking out this EP, and according to the feedback I mostly read on this one, I wasn't missing much. If I get around to it, I may check it out, but with all due respect I'm in no hurry to do so. I hate to say this, but I wasn't impressed with this album (more from an overall standpoint during the closing). Although he's still doing the "mafioso rap", on this album it honestly sounds SO outdated (and I think that's the FIRST time I've ever said that about any album) and the material itself was largely forgettable. It was released QUIETLY in 2011, and hopefully this is not his last album.


He truly has a career worthy of the Hall of Fame, however, at this point in his career (based on how he sounds on the Riches, Royalty, and Respect album), I don't want to say he's washed up, but it's clear he hasn't gotten better with age, at least on the mic. That's no knock on him at all, and I do feel he has one more good-great album left in him. I don't think it's over for him.
Posted by Wayne M. at Tuesday, July 03, 2012