The Power of the Tapes

What's the first thing that comes to mind when you see that pic right there? I know many things come to mind for me, such as the 1990s, dubbing, etc. I remember back in the day, before I started collecting CDs, cassettes/tapes were once the pinnacle of floating music around, especially with family and friends. Remember things like recording from a CD to a cassette for someone who didn't own CDs, high speed dubbing, recording songs off the radio during nightly countdowns (and claiming you "owned" the songs, lol) and mix shows? And I know I'm not the only person to do this, but remember when you didn't have any spare blank tapes around the house, however, there was a master copy laying around somewhere, and you put two small pieces of cotton or tissue in the holes at the top to do the recording, lol??? I recall doing that with CeCe Penniston's (remember her?) debut album back in 94. Another thing I remember is being HIGHLY upset when a tape would end, some of the time without warning, in the middle of something I REALLY wanted to record. Ah, the memories. At one point, CDs were considering expensive (and most still are, depending on the store) and cassette tapes were usually the first option.


As a direct influence from my dad, I remember having a full case of tapes, most master/some dubbed, and would listen to them until they popped on a few occasions. Funny story: I remember my cousin Osirian let me borrow Geto Boys' "Til Death Do Us Part" back in the day, and I played it often, so much so that it popped. I couldn't bring myself to tell him, and when I did, he was (rightly) pissed, lol. It wasn't an intentional thing believe me. And trust me, a tape popping was not a good thing for someone like me!

Late 96, when I started collecting CDs, my cousin Andre was still buying blank tapes (we had both started collecting CDs around the same time), and they were certainly getting better in quality. I was still buying them at one point, but as my collection started to get bigger, I no longer needed the tapes, and plus the sound and quality of CDs drew me in more and more. These are some of the products my cousin and I usually had a few stacks of: 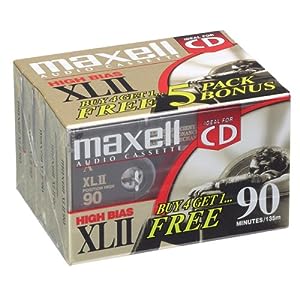 And the "CD IT" tapes were a favorite of my cousin Andre, I usually stuck wit the High Bias 90 minute Maxell tapes. Although the cassette tape is no longer a viable commodity, long time hip hop fans like myself will always remember how we felt when we had a certain tape in our hands. You felt a sense of importance for having something powerful on tape.