Note: This topic is been done entirely with a smile on my face. Why you may ask? Well, whenever I'm discussing my #1 and #2 favorite artists of all time, that's always the case!

The above photo was taken for The Source Magazine in 1997, and at this point, I was REALLY hoping for a collaboration and not a "feud/battle", and although the collaboration didn't happen for several years, the hope was still there. What I'm going to discuss here is possibly the greatest battle in hip hop history, no question. It was all kept on wax, no one was hurt, it re-energized a previous critically acclaimed artist (Nas) and made another a much bigger name (Jay-Z), and it truly elevated hip hop. As Nas stated in an interview, this feud "showed that two men can argue and not kill each other". He was right about that, and it was clear in my opinion that even during the midst of this battle, a strong sense of respect was there. It did essentially began as who was hip hop's "King of NY" since the unfortunate death of The Notorious BIG, and when asked that question, Nas and Jay-Z were frequently mentioned.

The War's On
After a small series of subliminal lines back and forth, things came full circle at the now infamous Summer Jam 2001. After Jay delivered the famous bars in reference to Mobb Deep's Prodigy (who lyrically hasn't been the same since), this last line made the hip hop world stand up and take notice: "ASK NAS HE DON'T WANT IT WIT HOV, NO!!!!!!. That one line is what prompted the "Stillmatic Freestyle":

I actually first heard this on radio (remember those days). Kentyl, a long time friend of mine, and I were on our way to the mall when this came on, and we were both quiet during the entire freestyle. When Nas said, "is he H to O, M to O, fa shizzle you phony the rappin version of Sisqo", both of our jaws just dropped completely. I couldn't believe what I was hearing, and all I could say was "it's on now".

Wow, two of the best diss records in hip hop history. I first heard "Takeover" on the radio (this would be unheard of if it happened today) and after the song went off the radio, a few callers talked about the song and almost all of them were so sure and confident that Nas was done. I thought the song was incredible, however, most of the people I knew were also telling me "that's it for Nas, he's done Wayne", and all I could do was say "just wait", and wait is what I, and others, did. When I heard "Ether" for the first time, it was on a DJ Kay Slay mixtape, and I was blown away and amazed by what I was hearing. I never thought I would hear Nas go at someone so hard and vicious, and when Kay Slay said "Nas coming back y'all!!!!" I couldn't agree more. At this point, Jay-Z was basically the hottest MC in the game, while Nas had been written off by fans and critics alike, so in this case, Nas had to come back strong and I shudder to think where his career would be had he not responded.

Overall, I picked Ether as the best song of the two then, and I still feel that way today. As mentioned by Jay-Z in a later song ("Blueprint 2"), he "gave Nas light when n***** forgot he emceed" and I agree with that. I did light a fire under Nas, which resulted in 2001's best album, the classic "Stillmatic", 3 months after Jay dropped the equally classic "Blueprint". I won't go into "Super Ugly" too much. Not only did that "song" not deserve a reply, but Jay got a little personal to a point where his own mom had to step in, and I respect that.

Fade To Black, plus more
Although they were still on opposite sides with no truce seeming imminent, the tension was still there, and that's when we got "Blueprint 2" (The Gift and The Curse) and "Last Real N**** Alive (God's Son). Both were very good songs, but they were clearly on a different level than Ether and Takeover, and that's no knock on either song. I was still hoping for them to settle the feud, and that brings me to Jay-Z's "Fade To Black" movie. When he performed "Where I'm From", towards the end of the first verse, he said "I'm from where n***** pull your card, and argue all day about who's the best MCs, Biggie, Jay-Z, and........ nah", and I'm sure I'm not the only one to catch that line. I always thought it would've been a tremendous and memorable surprise had Nas came on stage and united with Jay at Madison Square Garden. 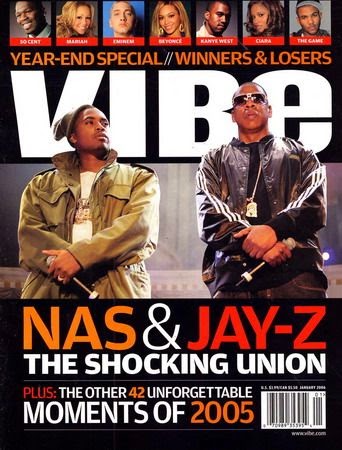 I was completely surprised when I saw this cover, and you know I just HAD to buy it, and this is when I first learned of Jay's "I Declare War" concert in 2005. I was SO happy to see them unite and end their feud, all I could do was say "when is the collabo coming??!!!" And that long time question would be answered on Nas' excellent 2006 release "Hip Hop Is Dead", in the form of "Black Republican", and to this day, EVERY time I listen to it, I do so with a smile (and head nodding, lol).

The Closing
It was no secret that I always said (and still do today) that Nas was the victor in this feud, based solely on "Ether". Jay-Z did go on to earn more success in his career, but from a pure hip hop standpoint, he didn't win this battle, respectively. They did another song together on Jay's American Gangster album, the awesome "Success" and I hope they do another song together at some point. While I did get "Black Republican", another product I've always wanted is for them to do a collaboration album together, but it doesn't look like we'll be getting that. As mentioned, this feud did a lot for the careers of both men as well as hip hop in general, and it'll be a LONG TIME before we see another feud like it, and in today's continued changing hip hop landscape, it's highly unlikely. And with that being said, I'll leave you with their interview they did with Sway on MTV!