The cover of this Source magazine brings back SO many memories, as I still have this issue. I remember buying it in late 95 when it first hit the store (remember when magazines were $2.95) and I was excited. Personally, 1995 was a VERY good year all around, especially my summer that year. If I decided to talk about my personal experiences that year, this topic would be LONG, lol, but in the interest of time, I'll just focus one of the main reasons why 1995 was a memorable year for me, and that's hip hop. 1995 was definitely one of the greatest years in hip hop history. Creativity was still at an all time high, classics singles dominated the airwaves and TV, monumental albums were released. Don't get me wrong, there was VERY little wack material out back then, but it wasn't highlighted 24/7. One might argue that 1995 was possibly the last great year in hip hop. What I'm going to do here is focus on a few highlights that year that I remember like it was yesterday. (Note: I certainly remember where I was when I saw the news of the "terrorist attack" on the Alfred P. Murrah building on April 19th, where 168 innocent people lost their lives. I was at my aunt Sandra's house at the time. My heart still goes out to the families.)

The Source Magazine
In addition to the issue at the top, The Source Magazine was at one point the most credible hip hop magazine out there, and whenever I bought an issue, I treated it like it was an event, especially in 1995. It was always an excellent magazine to read. If only I had a subscription back then, lol, but I was just as happy buying them each month. The following issues I did buy, but with the exception of the Year in Hip Hop 1995 issue, I unfortunately no longer own, and I'm certainly trying my best to get my hands on them again: 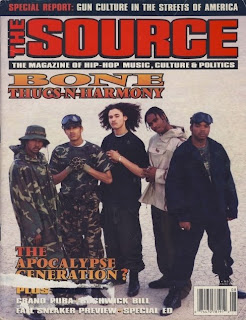 Yo! MTV Raps
In addition to BET's Rap City, this show was once a staple, Unlike today when you no longer see shows like this and other video programs show the SAME videos everyday, on shows like this and Rap City, you saw different videos practically everyday. You may see a few of the same ones every other day, but the only time you would see continuous repeats was during a countdown. The final show of Yo MTV Raps was a very good and memorable one, especially the Freestyle session at the end of the show with the likes of Rakim, Erick Sermon, KRS One, etc. I miss that show.

BET
Talk about a channel that's clearly NOT as good as it used to be. BET was the channel to watch back in the 80s and especially the 90s. Rap City, Video Soul, Teen Summit, even BET News (@ 11pm) were all must see programs.


I also can't forget about the memories with my family from this year as well.