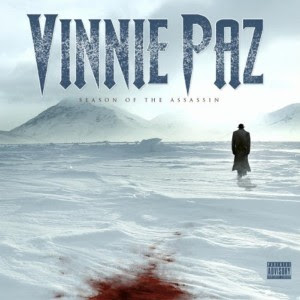 The first time I heard Vinnie Paz was on this tight song along with another nice underground artist by the name of Celph Titled:

I thought Paz was pretty decent on this song. He and Celph had decent chemistry, plus over a head nodding Buckwild track, this was no disappointment. From there, I decided to check out Paz' "Season Of The Assassin" album. Thus far, I've listened to this album 3 times, and each time I came to the same conclusion, in that he's unique (not in a negative way) with a lot to say, but he's one of those artists I can take in small doses. It does become a bit much to listen to him over the course of 21 tracks. The album is good, but overall I don't see myself adding it to my collection.